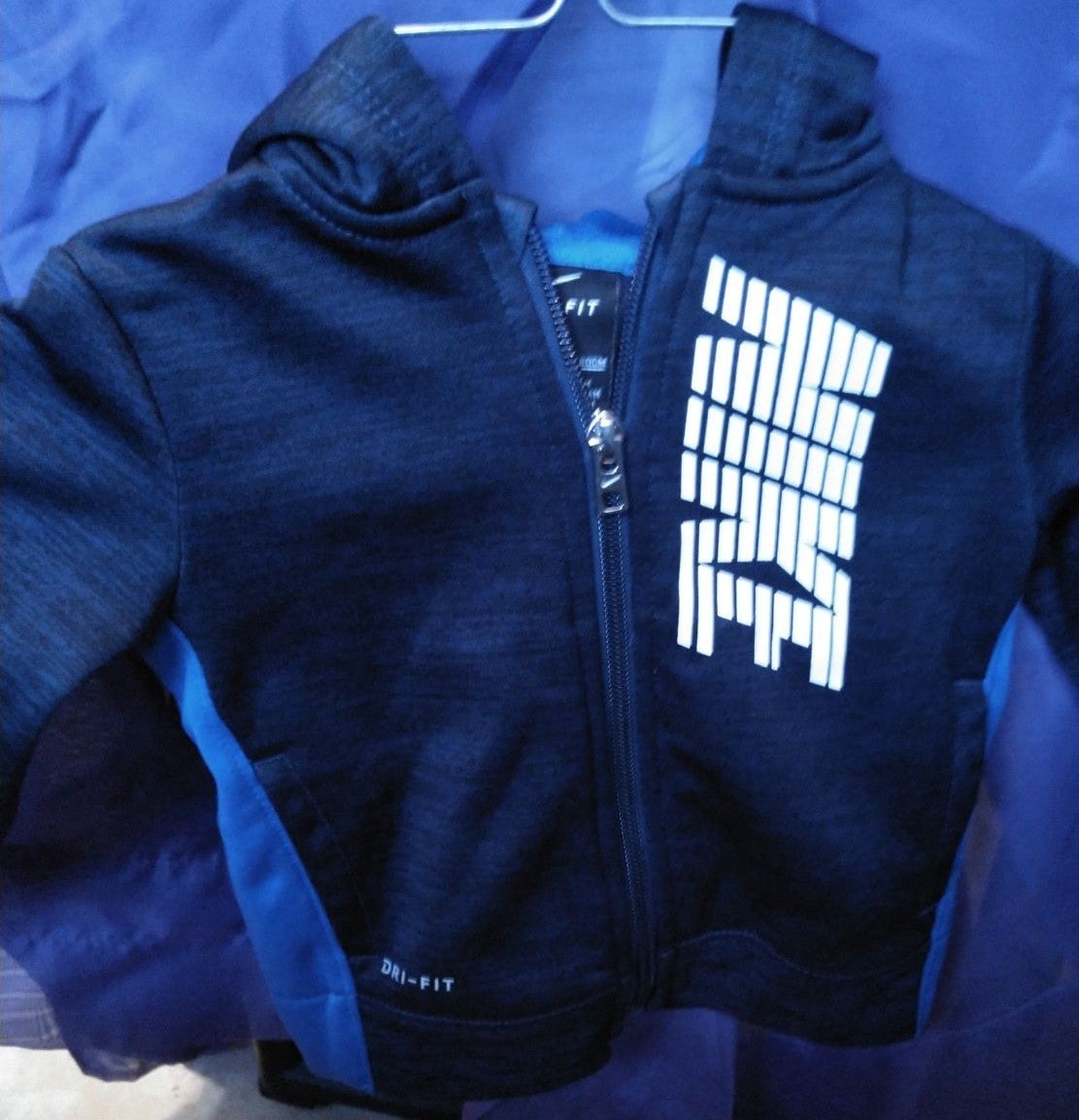 Nike Blue with Black and white 2pc Track suit. Size 12 months. Not new but looks like it's new..

We assess that Russia would consider initiating a cyber attack against the Homeland if it perceived a US or NATO response to a possible Russian invasion of Ukraine threatened its long-term national security. Russia maintains a range of offensive cyber tools that it could employ against US networks—from low-level denials-of-service to destructive attacks targeting critical infrastructure. However, we assess that Russia’s threshold for conducting disruptive or destructive cyber attacks in the Homeland probably remains very high and we have not observed Moscow directly employ these types of cyber attacks against US critical infrastructure—notwithstanding cyber espionage and potential prepositioning operations in the past.

ATP 7-100.3 describes Chinese tactics for use in Army training, professional education, and leader development. This document is part of the ATP 7-100 series that addresses a nation-state’s military doctrine with a focus on army ground forces and tactical operations in offense, defense, and related mission sets. Other foundational topics include task organization, capabilities, and limitations related to military mission and support functions. ATP 7-100.3 serves as a foundation for understanding how Chinese ground forces think and act in tactical operations.

We assess that Iran likely will continue to rely primarily on proxy news websites and affiliated social media accounts to attempt sustained influence against US audiences, while we expect intermittent, issue-specific influence attempts via other means (e.g., e-mails). We base this assessment on Iran’s actions since at least 2008 to build and maintain vast malign influence networks anchored by proxy websites, as well as Iran’s attempts to find new avenues to re-launch established malign influence networks after suspension. Tehran employs a network of proxy social media accounts and news websites that typically launder Iranian state media stories (stripped of attribution), plagiarize articles from Western wire services, and occasionally pay US persons to write articles to appear more legitimate to US audiences.

This Handbook focuses on the legal matters pertaining to providing assistance to domestic civil authorities, also known as DSCA. Circumstances involving the exercise of homeland defense authority and capabilities, i.e. “countering air and maritime attacks and preventing terrorist attacks on the homeland,” are beyond the scope of this handbook. Nonetheless, it should be kept in mind that actions taken within the homeland defense function may directly impact the DoD’s DSCA mission once an event has occurred. Likewise, for ongoing events or continuing attacks, DSCA actions may affect homeland defense capabilities.

Criminals and violent extremists continue to seek ways to acquire firearms through the production of privately made firearms (PMFs). PMFs can be easily made using readily available instructions and commonly available tools, require no background check or firearms registration (serial number) under federal law, and their parts have become more accessible and affordable. This, combined with the increase in law enforcement recoveries of nonserialized and counterfeit firearms in criminal investigations, will most likely create increasing challenges in law enforcement investigations, including weapon accountability access and tracking. PMF awareness and identification can aid PMF recovery, prevention of illicit activities including terrorism, and overall first responder and public safety.

Debate over double masking continues to dominate online discussion. Many members of the public are frustrated with what they feel is inconsistent messaging.

There are reports of increased skepticism regarding the vaccine among Latinx communities. There is a lack of trust in the guidance and policies being shared by the federal government and some state and local officials. This is causing some to feel more hesitant about receiving the vaccine.

Recent high-profile mass-casualty attacks in the West have demonstrated the enduring threat posed by a wide range of racially/ethnically motivated violent extremists and conspiracy-driven malicious actors, including those inspired by far-right, neo-Nazi, and white supremacist worldviews.

The COVID-19 pandemic sheds an important light on the criticality of futures-based thinking to move us beyond conventional assumptions and positions. In today’s chaotic cycle of rapid change, growing complexity, and radical uncertainty, the national security establishment must develop the skills and flexibility to adapt to the unexpected. To be sure, the fallout from COVID-19 has revealed overlooked vulnerabilities for our supply chains, our society, our economy, and—most pertinent for this report— our national security strategy, which relies on all three. The primary aim of this report is to disrupt how we conceptualize national security futures. Rather than arrive at “definitive” conclusions or prescribe budgetary, policy, or force structure recommendations, this document instead challenges us to consider how the future can defy accepted probabilities to affect the Department of Defense and the Department of the Air Force.

On 26 July 2020, al-Hayat Media Center, a news outlet of the Islamic State of Iraq and ash-Sham (ISIS), released an English-language propaganda video entitled “Incite the Believers,” which encourages ISIS supporters to conduct incendiary attacks in the United States. The narrator acknowledges that ISIS supporters may have difficulty traveling to ISIS-controlled territory overseas and instead encourages them to conduct attacks where they live. The video also encourages ISIS supporters who are unable to obtain firearms or explosives to consider using incendiary attacks as an alternative.

This document provides guidance for federal Executive Branch departments and agencies regarding best practices, lessons learned, and recommendations to protect against the threat of malicious unmanned aircraft systems (UAS) operations.

This Joint Threat Assessment (JTA) addresses threats to the 59th Presidential Inauguration taking place in Washington, DC, on 20 January 2021. This JTA is co-authored by the Federal Bureau of Investigation (FBI) and Department of Homeland Security (DHS)/US Secret Service (USSS), with input from multiple US Intelligence Community and law enforcement partners. It does not include acts of non – violent civil disobedience (i.e., protests without a permit), which are outside the scope of federal law enforcement jurisdiction.

This Joint Intelligence Bulletin (JIB) is intended to highlight the threat of violence from domestic violent extremists (DVEs) in the wake of the 6 January violent breach by some DVEs of the US Capitol Building in Washington, DC, following lawful protest activity related to the results of the General Election. Anti-government or anti-authority violent extremists (AGAAVE), specifically militia violent extremists (MVEs); racially or ethnically motivated violent extremists (RMVEs); and DVEs citing partisan political grievances will very likely pose the greatest domestic terrorism threats in 2021.

Russian PMCs are used as a force multiplier to achieve objectives for both government and Russia-aligned private interests while minimizing both political and military costs. While Moscow continues to see the use of Russian PMCs as beneficial, their use also presents several vulnerabilities that present both operational and strategic risks to Russian Federation objectives.

We assess that Russia is likely to continue amplifying criticisms of vote-by-mail and shifting voting processes amidst the COVID-19 pandemic to undermine public trust in the electoral process. Decisions made by state election officials on expanding vote-by-mail and adjusting in-person voting to accommodate challenges posed by COVID-19 have become topics of public debate. This public discussion represents a target for foreign malign influence operations that seeks to undermine faith in the electoral process by spreading disinformation about the accuracy of voter data for expanded vote-by-mail, outbound/inbound mail ballot process, signature verification and cure process, modifying scale of in-person voting, and safety and health concerns at polling places, according to CISA guidance documents provided to state and local election officials.

We assess that violent opportunists will continue to exploit ongoing nationwide lawful protests as a pretext to attempt to disrupt law enforcement operations; target law enforcement personnel, assets, and facilities; and damage public and private property. We have identified multiple tactics currently at play, including the use of weapons, counter-mobility, physical barriers, screening and concealment, intercepted communications, and pre-operational activities.

In the last 24 hours the types of people or groups seeking to carry out violence in response to the death of George Floyd in Minneapolis has shifted in many cities. The initial violent looters and protestors were believed to be organic members of the local communities. However, domestic violent extremists are attempting to structure the protests to target specific symbols of state, local, and federal authority. We anticipate armed individuals will continue to infiltrate the protest movement. We assess with high confidence during the period of darkness from 30 to 31 May the violent protest movements will grow and DVEs and others will seek to take over government facilities and attack law enforcement.

The Chairman of the Joint Chiefs of Staff Standing Defense Support of Civil Authorities (DSCA) Execute Order (EXORD) would not enable sufficiently rapid sourcing to provide for the reception, staging, onward movement, and integration of forces for a domestic complex catastrophe.

In a domestic complex catastrophe, with effects that would qualitatively and quantitatively exceed those experienced to date, the demand for Defense support of civil authorities would be unprecedented. Meeting this demand would be especially challenging if a cyber attack or other disruption of the electrical power grid creates cascading failures of critical infrastructure, threatening lives and greatly complicating DoD response operations.